Discovery of Baroque surface adjustments of the altars in Zátoň

During the restoration of Baroque altars in the Church of St. John the Baptist in Zátoň, Baroque surface adjustments were discovered on all important parts of the furniture. The difficult restoration of these worthy assets was only possible due to perfect international cooperation.

Three Baroque altars inside the church – the main one, consecrated to St. John the Baptist, and the side altars of St. Simeon and the Visitation of Holy Mary – were restored gradually between 2014 and 2017. After the last works had ended in 1928, the church furniture was covered in modern oil-based brown and black marbling, and ornamental carvings were fitted with aluminum and bronze metallic layers. Before the restoration, the altars were in a bad way; the wood was damaged by insects, and some parts of the heritage were stolen.

First, the restoration survey was performed on all pieces of furniture, and the survey results became the main ground for the overall restoration concept. The oil-based brown and black marbling from the first half of the 18th century was discovered on every altar. The survey and restoration were performed by David Blahout, Ph.D.; a big part of the funding was provided by countrymen of Zátoň living in Germany, through their association and the German Ministry of Culture. 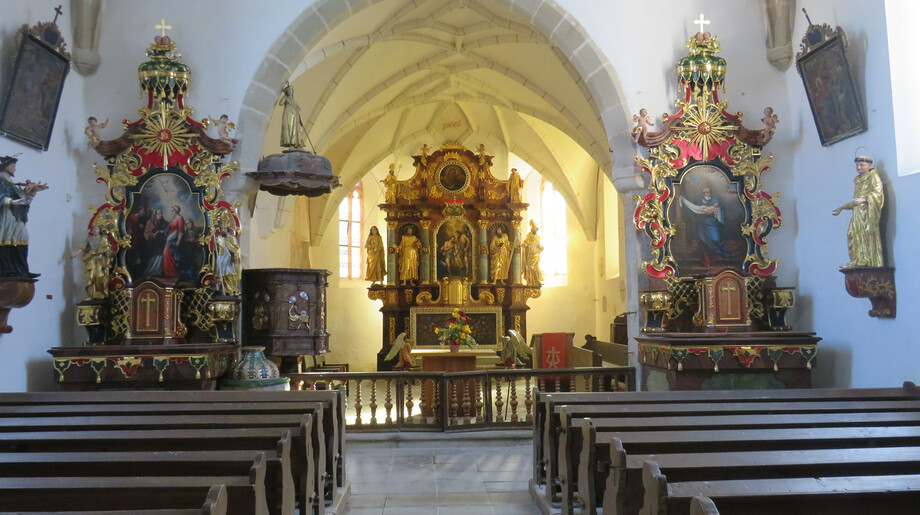 In 2017, the side altar of St. Simeon was subject to a thorough survey and then restoration. Under the 1928 coating, the quality of which was inferior in terms of both art and craftsmanship, the original illusive marbling was preserved. When the metallic and bronze layers were carefully stripped, the 18th century gilding, using the traditional poliment technology, was restored. A special feat was the discovery of silver-plated areas with blue, red and green lasures that have been preserved in large areas and in extraordinarily good quality. The inscription „Franz Feit Nettolitz 1744“, discovered during the restoration, made it possible to identify the author and the date of the work.

The Baroque surface adjustments in the Church of St. John the Baptist in Zátoň are especially unique for their level of presentation and the quality of both art and craftsmanship, exceeding the regional scope. The discovery was, moreover, made on all important parts of the church furniture. It was therefore possible to fully restore the demanding and aesthetically valuable surface adjustments of Baroque woodcarving art.

The restoration was based on sensible completion of reversible retouches. The interpretation was quite a difficult task, which helped specify the concept of presentation of this heritage. The result is a radical change of the church interior; the discovery of lasures also contributed to better understanding of color schemes of Baroque polychromed heritage assets in the Central Europe.

The restorer David Blahout, Ph.D., and the Association Förderkreis Kirche St. Johannes Enthauptung Ottau e. V., represented by the Chairman Christoph Anderle and the founder Franz Kopani, were nominated for the National Heritage Institute Prize, category: Discovery of the Year.