Home Restoration of a theater in the New...

Restoration of a theater in the New Chateau, Nové Hrady

Thanks to the understanding of the owner, the New Chateau in Nové Hrady is gradually restored with a great respect to its historic value and importance. In 2017, the restoration and reconstruction of one of the few well-preserved chateau theaters in Southern Bohemia were completed, including the restoration of its original functionality.

The New Chateau in Nové Hrady was built by Count Johann Nepomuk Buquoy according to Maxmilian von Verschaffelt’s project between 1801 and 1806. The empire chateau theater, built in 1822, performed an important social function during the autumns, when the aristocrats gathered at the chateau. The theater obtained its current looks during the reconstruction between 1849 and 1855, initiated by Count Georg Johann Heinrich Buquoy; during this reconstruction, the theater was also fitted with decorations and props.

The rectangular theater hall (8,5 × 18.75 m) is illuminated by five tall windows. The auditorium (8.5 × 8.5 m) accommodated up to 320 visitors. The stage is framed by a white portal decorated by golden adornments. Above the stage, there was a high gridiron, to which the decorations were lifted without folding or rolling; the gridiron takes the whole height of the second chateau floor. The preserved pulleys enable to hang 34 decorations, yet it might have been well possible to add more small props. The walls are fitted with ingenious shafts for weights that enabled the operators to lift and handle the props. The plan from 1889 shows four pairs of side wings and backdrops; this arrangement is also reflected in the position of pulleys under the ceiling. The identical system was installed in the Kačina theater, or in the Austrian chateau Weitra 15 km away; the Buquoys were in frequent touch with its owners. 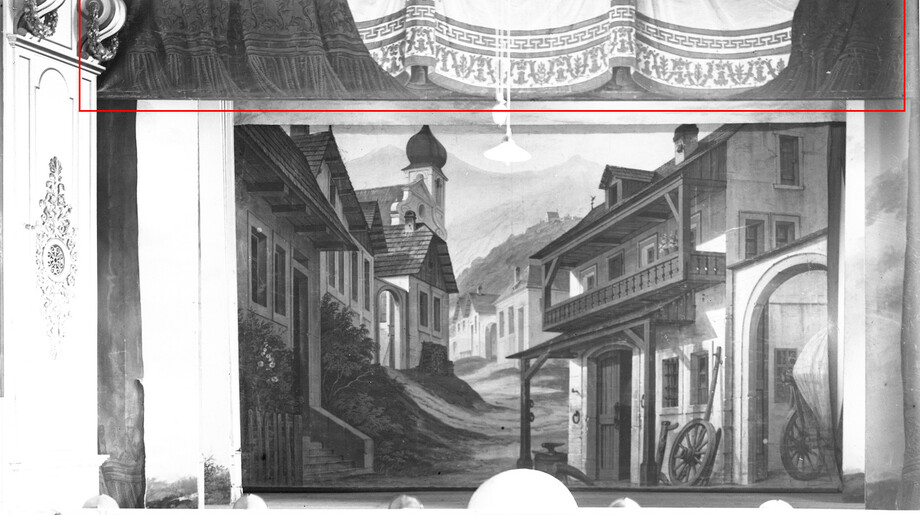 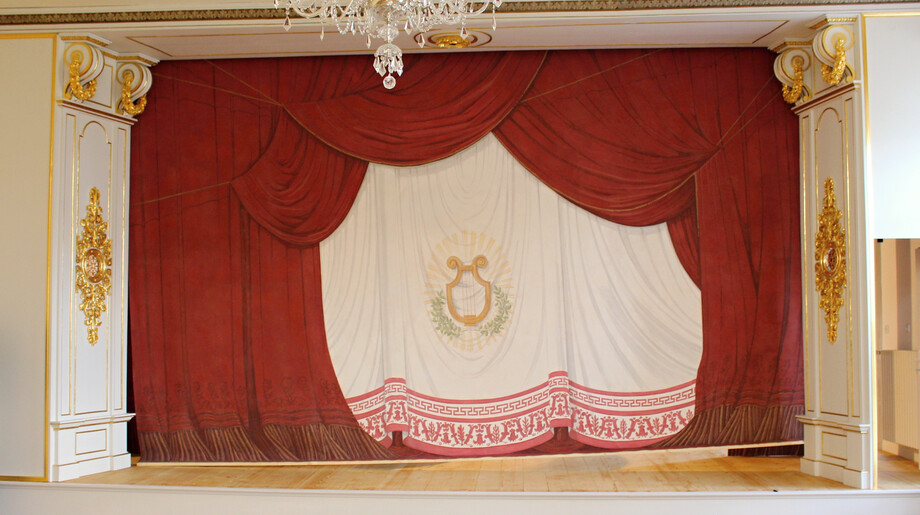 In the end of WW2, the chateau was plundered, and after 1948 it was used as a shelter for children that left Greece when the civil war had started in the country. The theater was used as a cinema at that time, the walls were coated in grey, and most of the equipment was lost. From 1958 till the early 1990s, the site was used by the Secondary Agricultural and Technical School; since the early 1960s, the building was reconstructed to suit this purpose. Currently it belongs to the Academy of Sciences, and is used as a conference and research center of the Institute of Microbiology.

Thanks to the understanding of the owner, the chateau is gradually restored with a great respect to its historic value and importance. The restoration of the chateau theater is based on thorough research of archives, restoration surveys and comparative studies. The extraordinarily thorough work of restorers, examining the results of the archive research, together with the precise use of iconographical sources, enabled the reconstruction and restoration of one of the few well-preserved chateau theaters in Southern Bohemia to the original conditions of the mid-19th century, including theater technology, equipment, curtains and backdrops.